CENTRAVIS Has Kept its Balanced Position among the Best World Manufacturers of Seamless Tubes and Pipes: the Company’s Results of 2020

Despite the sharp decline in the world economy, contributed by the coronavirus pandemic, the key performance indicators of CENTRAVIS are almost kept at the pre-crisis level of 2019. By the end of 2020, the Company's output has amounted to 19.05 thous. tons.

It is 9.3% less than at the end of 2019. Meanwhile, the Company’s production rate is ahead of the industry average growth.
It would be remembered that, according to 11 months results of 2020, the companies included in Ukrtruboprom have cut back output of tubes and pipes by 26.2% compared to the same period over 2019. Tubes and pipe export volume from Ukraine has decreased by 23.36% over January-November 2020.
However, CENTRAVIS goes ahead with its sale development around the world. The Company supplies seamless tubes and pipes to the European Union, the Middle East, Latin America, Eastern Europe, the USA, India, Australia, Japan, Canada, and other regions and countries.
Buhlmann Group, Damstahl GmbH, ThyssenKrupp, Salzgitter AG, Karl Mertl Handelsges are the key customers of CENTRAVIS in 2020. The Company has implemented a number of large-scale orders for such world companies, such as Bousted International Heaters, Stainalloy Nederland, Buhlmann Group.
CENTRAVIS products are used in the power, automotive, chemical and food industries, pharmaceuticals and other areas.
The previous year has provided everyone with the strength test in an indiscriminate way. I think we have coped with all the challenges. Our team has managed to fall in line. We have improved our products and helped our customers to solve their problems. But the most important thing is that we have strengthened our position and we are ready to be in progress in 2021,”said Yuriy Atanasov, the Chief Executive Officer of CENTRAVIS.
According to his version, CENTRAVIS has kept its good position among the world’s best manufacturers of seamless tubes and pipes due to focus on quality products and highly skilled services.
Over 2020, the Company has invested EUR 1.85 million in its production upgrading and has launched a number of new products on the market.
This year CENTRAVIS will keep its investment activities. The planned investments for 2021 are EUR 8-10 million. The Company has already made its booking for the first part of 2021 and do the best efforts on its sales territory growth.
CENTRAVIS is one of the world’s largest manufacturers of seamless stainless steel tubes and pipes. The Company was founded in 2000. The Company’s production facilities are located in Nikopol (Dnepropetrovsk region). CENTRAVIS is one of the world’s top 10 players, it supplies products to Thyssenkrupp, BMW, Alstom, Linde, Samsung, Volkswagen and other companies. The Company employs over 1.400 employees. 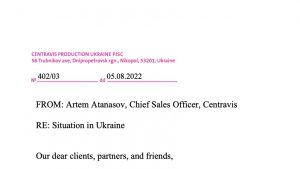 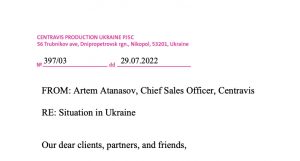 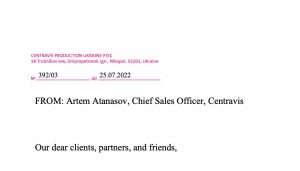